Isn’t fashion just “totally tubular”? In the past year or so, we’ve born witness to the so-called “now memories” of popular eighties based television shows and fashion trends—we’ve seen it in our schools, on social media, and even in Vogue. This may have something to do with the popularity of Stranger Things, the Netflix Original Series by the Duffer Brothers. In the hallways of Beacon and on runways, eighties trends have begun to crop up—such as the vintage mom jeans that Barb displayed in the show’s first episode. Jean jackets, Vans, Converse, and classic multicolor-striped T-shirts are now everyday fashion. Sometimes, it really feels like we’ve gone back in time!

Many teen and young adult clothing stores, such as Urban Outfitters, Brandy Melville, and Forever 21 are jumping on the bandwagon and bringing back the eighties, sometimes with a modern twist. In Bella Hadid’s new ad for Nike that was featured in Vogue, the eighties are very prominent: the camera quality reflects that of an eighties home video, and she wears a variety of  turtlenecks, as well as a silver shirt. We11 Done, a new company that launched in Seoul Fashion Week, channels the eighties, too, with corduroy and velvet, and plaid and shearling.

If you want to get in on the fun, try thrift shopping while you channel your inner El, Mike, or Steve (note: when channeling Steve, hairspray is a must)! If you can’t thrift, try Topshop, Urban Outfitters, H&M, and other trendy teen stores. The trick is keeping your eyes open for stripes, denim, rugby shirts, and classic white sneakers. There’s an eighties trend for everyone: if you like black, try “Bitchin’” Eleven. Sleek back your hair, grab some black eyeshadow, and throw on an oversized suit top with a beat up T-shirt—you’re ready to go! You can also screenshot outfits you see and like online, then raid your family’s old clothes and head to a Salvation Army, Buffalo Exchange, or a local yard sale with a fashion-forward friend.

The costume designers for Stranger Things really dug deep. They uncovered small yet meaningful trends that put the show together. In one instance, director Andrew Stanton mentioned that the costume designers had Billy wearing a sleeveless shirt. At first, the actor wanted Billy to be shirtless but when they tried the scenes with the shirt, Stanton knew it was right. According to The New York Times, Stanton explained, “I heard about four guys behind I camera go, ‘Oh man, I totally had that shirt.’ I was like ‘O.K., we’re keeping it.’” The costumes are so accurate that when you’re watching Stranger Things, it doesn’t feel like 2017 anymore. 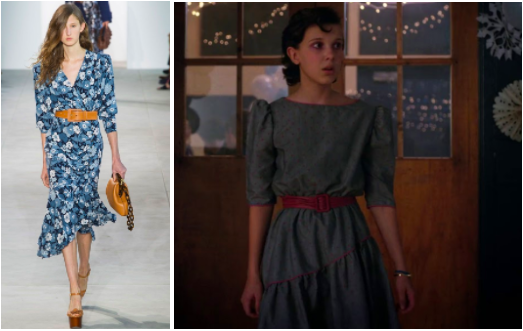 You can see the similarities in these two outfits: the belt, the statement sleeves,

Plaid is everywhere. Both Dustin and Nancy wear it to the Snowball Dance, and it’s being walked down the runway by many brands (Lacoste).

The classic look—a cute dress with white shoes and a jacket thrown on top.

But, best of all, short or slicked back hair to pull the look together (We11 Done).

Stripes and white collars. This is one trend I thought would stay buried…but now, it’s back and longer than ever (Rosie Assoulin).