We often speak as if Trump could destroy the world in one tweet. Nicknaming dictator Kim Jong Un “rocket man” and threatening to “totally destroy North Korea” may give us reason for believing so. But behind this pompous and inflammatory rhetoric is a much more insidious threat: Trump’s deconstruction of the U.S.’s commitment to environmental protection. His nationalistic and anti-scientific agenda is undermining the global fight against climate change, making individual action to protect the planet even more imperative.

To some extent, it’s already too late. According to NASA, “the planet’s average surface temperature has risen about 2.0 degrees Fahrenheit…since the late 19th century.” Rising temperatures cause more than a warmer winter; polar ice caps are melting, glaciers are retreating, and sea levels are rising at alarming rates. Natural disasters are occurring with growing frequency and magnitude, wreaking unique havoc on communities around the world.

A heavily industrialized nation with one of the highest GDPs per capita, the U.S. has played a significant role in the exacerbation of climate change. The New York Times reports that the U.S. “has contributed more than any other country to the atmospheric carbon dioxide that is scorching the planet” over the course of its existence. On the basis of yearly carbon and greenhouse gas emissions, the U.S. ranks second only to China. According to the Union of Concerned Scientists, in 2015, China emitted almost double the amount of carbon dioxide in total that the U.S. did; however, China’s per capita emissions were about 2.4 times less than those of the U.S., even though its population is 4.2 times greater.

Trump has given voice to these unsubstantiated views, pitting corporate interests against environmental ones. In 2012, he tweeted that global warming “was created by and for the Chinese in order to make U.S. manufacturing non-competitive” and in 2014, he called it an “expensive hoax.” During the 2016 Presidential Election, his rhetoric focused public conversation around the existence of man-made climate change rather than the question of how Americans can combat it.

Now, under the Trump Administration, the U.S. has abandoned the long-stated goal of environmental conservation. First came the appointment of Scott Pruitt, former Attorney General of Oklahoma, as Administrator of the Environmental Protection Agency (EPA)—which he was infamous for repeatedly suing. Under his reign of anti-environmental terror, civil servants have fled their posts in record numbers; last December, the New York Times and ProPublica reported the departure of over 700 employees from the EPA as the Trump Administration pursued its goal of shrinking the agency by 20%, which requires eliminating 3,200 positions. Among those leaving are scientists, environmental protection specialists, department directors, attorneys, and program managers responsible for protecting communities’ water and air from damaging corporate interests, and ensuring a decent quality of life for all Americans.

The EPA’s brain drain, which poses a palpable threat to the agency’s ability to protect the environment and human health, sends a clear message: there is no room for environmentalism in Trump-era Washington. What is there is room for, however, is big business. Along with corporate deregulation, Trump has enabled the shrinking of national monuments and the expansion of offshore oil and gas drilling. He also supported the construction of the Keystone XL pipeline and EPA Administrator Pruitt’s proposed repeal of the Clean Power Plan. Moreover, the Trump Administration has sought to limit public access to information on climate change by removing references to the issue from government websites.

Last summer, President Trump announced his intent to withdraw from the Paris Climate Agreement. Calling the accords “very unfair” and citing his “love” for the American worker, Trump presented Paris as a “bad deal.” His simple narrative diminished the accords’ significance  as a major international resolution on environmental protection. Trump also failed to note that the U.S. is still technically part of the agreement, having committed to Paris until fall of 2020.

Yet Trump’s declaration of withdrawal, albeit mostly rhetorical, is still a major detriment to the U.S. on the world stage. Trump’s lack of an invitation to the One Planet Summit hosted by French President Macron last winter was one example of U.S. exclusion from important environmental talks. China, the world’s greatest polluter, has been quick to fill the void in international order and position itself as the new leader of the global campaign to go green.

Beyond embarrassing the U.S., Trump’s anti-environmental policy agenda hampers international efforts to combat climate change. The U.S. continues to be a top emitter of greenhouse gases; it has a unique responsibility to reduce its ecological footprint. Under Trump, the U.S. has not only neglected this responsibility but enabled new environmental destruction. 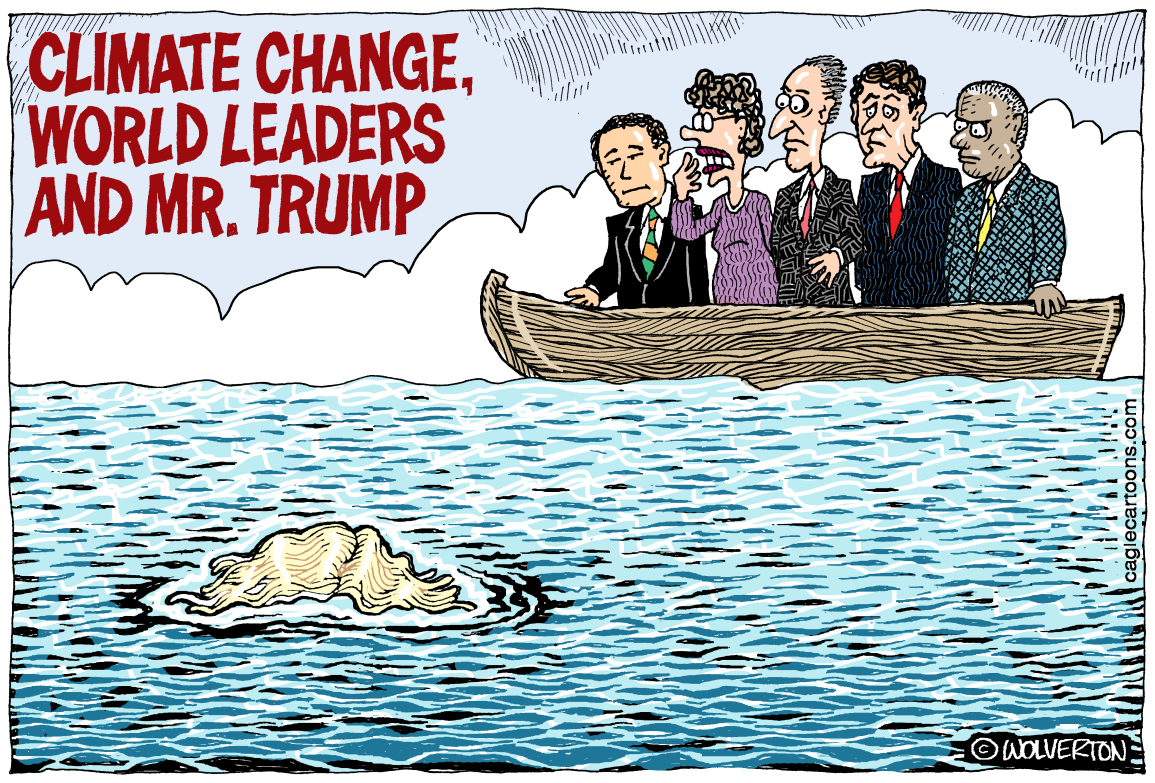 Climate change is a pervasive global threat. We can’t turn back time and undo all of the pollution the earth has suffered at human hands or revert to Stone Age-style living, and unfortunately, we can’t swap out our presidential administration in the blink of an eye either. Yet especially now, with a negligent executive branch, Americans have a pressing responsibility to confront our outsized contribution to climate change. Many of us rely on energy-consuming technology and the luxury of being able to pick something up at the store whenever we feel the need. These practices, ingrained in our daily lives, consistently damage the environment. To pick up the onus of sustainable living, we must reevaluate them…

2. Inform yourself. There is a ready supply of articles, books, and documentaries on the facts of climate change and the campaign for climate justice. Helpful reads include Michael Pollan’s The Omnivore’s Dilemma and Jonathan Safran Foer’s Eating Animals, while documentaries include An Inconvenient Truth, Bag It, and Tapped. These resources can deepen your understanding of natural and man-made climate change, as well as improve your ability to communicate the issue to your families and friends.

3. Speak up, speak out for Planet Earth. Attend a People’s Climate March or another environmental rally. Hold your local and state legislators accountable for implementing environmentally responsible policies. Support eco-friendly companies. Share your knowledge in every way that you can.

Presidential power may be transient, but the harms done to the planet by government officials who prioritize corporate profits over sustainability are not. The Trump Administration is neglecting the U.S.’s duty to combat climate change in favor of an anti-environmental, pro-big business agenda that ultimately, the American taxpayer will foot the bill for as the costs of living on a polluted planet grow. Now is the time to take action independent of the federal legislature and consider our own role in shaping a greener future. The health of our planet is in our hands.