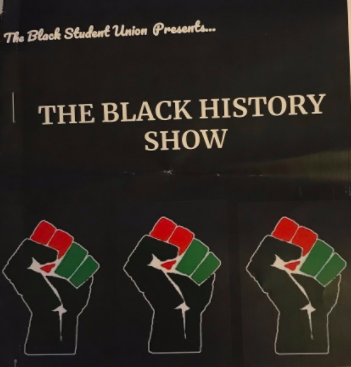 On Friday, March 16th, students crowded into Beacon’s auditorium for the Black Student Union’s third annual Black History Show. With a total of 300 tickets sold, the audience included not only Beacon students but also many administration and faculty members, including Principal Lacey, Assistant Principal Mitchell, AP Biology teacher Ms. Diran, English teachers Ms. Willett and Ms. Heintz, and History teachers Mr. Miller and Mr. Moscow. Around 4:45pm, the show’s hosts, Aida Sawadogo and Bernice Almonte, greeted their audience with an introduction to the show. Promoting the mission of BSU, the show was meant “to provide a safe space for people of color to actively engage in intersectional issues, while also promoting activism as a collective.”

The show began with a performance of the Black National Anthem, “Lift Every Voice and Sing,” by Bernice, Clementina Aboagye, Azalías Hernández Sánchez, and the members of BSU. From there came a variety of student acts, ranging from skits and song to spoken word and dance–including Step routines, West African dance, and hip hop. In total, the show ran for about two hours and 15 minutes from 4:30-6:45pm with a 10-minute intermission around 5:50-6:00pm.

After the Black National Anthem, the show continued with a skit put on by several freshman in which an elderly woman attempted to bring a modern-day black teenager to “Black Utopia.” The teenager did not know “where she was from,” revealing a disconnect from her cultural heritage and identity. This theme of identity came up again when a dance troop sporting traditional West African wraps took to the stage to perform a West African dance. Shortly after, Senior Hamly Tavarez performed two hip hop routines. Audience members chanted along to Cardi B’s “Bodak Yellow,” bouncing up and down in their seats as Hamly dominated the stage. 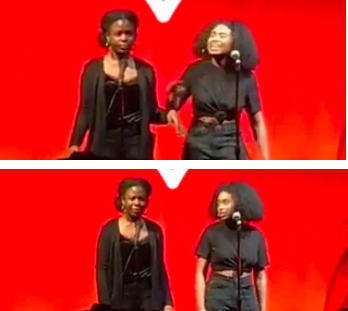 Students Hawa Jalloh and Peri LeBlanc read “To Be Black and Woman and Alive.”

There were also several spoken word performances, such as Delores Copeland’s “Being Black in America in 2018” and Aaliyah Daniels’ powerful poem about being seen as both human and black. The spoken word pieces touched on a variety of social justice issues, including the #BlackLivesMatter movement and the experiences of black women in America. Another poem by Senior Elissia Harris spoke about the importance of natural hair and embracing her identity. Two acts also used spoken word by the poet Crystal Valentine, whose work calls out cultural appropriation and depicts black self-love. Shasha Keaton and Jaela Williams read Valentine’s poem about the appropriation of black culture by Kylie Jenner and white media. Peri LeBlanc and Hawa Jalloh read another Valentine poem entitled “To Be Black and Woman and Alive” that Valentine co-wrote with poet Aliyah Jihad.

Every symbolic and engaging act captivated the show’s audience. Junior Ella Fruchter found it “incredible to witness the talents of so many individuals in a student-organized event.” She was also “impressed with everyone who was so vulnerable and strong at the same time.”

Another audience member, Emily Lucas, said, “it was amazing how [the show was] able to transition through comedy and serious acts while still bringing attention to serious issues.”

Known for its level of interaction with the audience, the Black History Show had an intentional craft underpinning its light-hearted atmosphere and showcase style. Many of the acts ended with students raising their fists, representing the Black Power movement, and the stage was often backlit with a blazing red screen that illuminated the performers’ figures when the stage lights turned off between acts. The choices of song and dance reflected a blend of historical and modern music, connecting the struggle for racial equality and freedom from centuries-ago Western colonialism in Africa to the 1960s civil rights era and modern-day protest. Aida and Bernice’s transitions between acts were simultaneously comedic and analytical, livening up the audience while also conveying acts’ significance within the broader context of the show and to them personally.

For Aida, this year’s Black History Show was particularly timely, coinciding with the growing national student movement for gun reform: “As a leader of BSU and an active participant in the [March 14th] walkout it got me thinking a lot about the ways in which movements can be perpetrated through different media.”

“Events like the Black History Show are what truly make me feel like a part of the Beacon community,” explains senior and performer Divine Ndombo. “Every performance was symbolic and meaningful, and seeing people of color bring those messages of…what it means to be black in America forward is so important.”

Performer Hawa Jallow viewed the show as an impressive display of “what a group of students who want to feel empowered can do all together!”

In reflecting on the show, Aida expressed gratitude for her BSU co-leader Oumy Souane, BSU advisor Ms. Reyes-Lamon, the show’s sound technician Dawson Holliman, and the show’s light technician Elijah Clarke. She noted the impressive involvement of the freshmen and junior classes in putting the show together, and the show’s success in honoring the mission of BSU.

The Black History Show ended with a reprise of the “Black Utopia” skit featured in the first act. However, this time the teenager returned from “Black Utopia” and recruited her modern-day friend to join her. Reprising this skit imparted an empowering message of cultural belonging and found identity. It was a fitting end for an immersive and engaging show that truly touched its audience members.