**If you have any quotes or media that you would like to share with The Beacon Beat, please do so in the Google Form listed here: https://docs.google.com/forms/d/1ZxdrFZzuCIPDxOQvUFrKDWSG7Ih68TEyc5vVvSwjs-4/edit 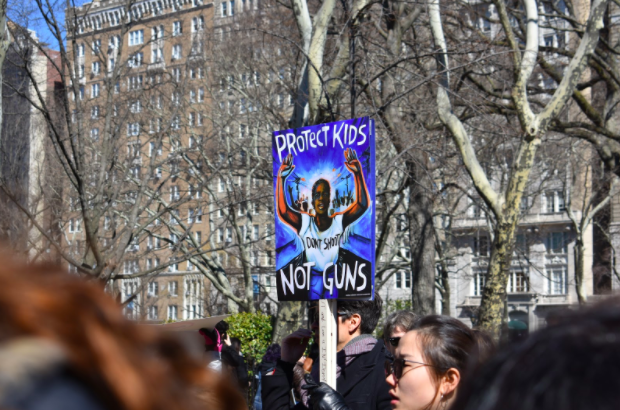 With handmade signs and empowering chants, people across the nation took to the streets on March 24th, 2018 to participate in the “March For Our Lives.” The march took place in Washington DC and sister marches were held in numerous cities including New York City, Los Angeles, and Nashville. The march was organized by the survivors of the Parkland school shooting that took place last February. Teenage survivors and gun reform activists David Hogg, Emma Gonźalez, Cameron Kasky, Alex Wind, and Jaclyn Corin were assisted by Everytown for Gun Safety in organizing the event. Demonstrators ranged from infants to grandmothers, with people uniting across generations to call for legislative change.

Over the last two months, the fight for gun regulation has only intensified. After the shooting at Marjory Stoneman Douglas (MSD) High School, the media has increased coverage of gun-related stories, while teen activists have used their platform to further discussion of gun violence and common sense gun reform. The horrible tragedy that occurred at MSD, in which 17 students and faculty were killed by shooter Nikolas Cruz and his AR-15 rifle, has sparked a nationwide “Never Again” movement.

In NYC, the march began at 10am and the route went from 72nd Street and Amsterdam Avenue and to 45th Street and 6th Avenue. An estimated 200,000 people marched along Central Park West that Saturday morning. One marcher and Beacon senior Meghan Callahan found the march “incredibly powerful,” and “was especially impressed with our nation’s readiness to call out NRA-supporting politicians and anyone who has turned a blind eye to gun violence.” Along the march route were massive speakers broadcasting the words of NYC organizers and activists, as well as speeches taking place in DC and across the nation. At 62nd Street, there was a podium and stage set up for demonstrators to watch the speakers live.

NYC speakers included Parkland shooting survivor Sam Hendler, the Wear Orange Movement founder Nza-Ari Khepra, and Sandy Hook survivors. The speakers weighed in on issues such as gun violence in black and Latino communities, the #BlackLivesMatter movement, the Sandy Hook shooting, and the lobbying power of the NRA. Across marches, celebrities such as Amy Schumer, Yara Shahidi, and Connie Britton spoke on the issue of gun violence, while there were musical performances by Charlie Puth, Miley Cyrus, and Demi Lovato. Dr. Martin Luther King Jr.’s granddaughter, Yolanda Renee King, joined the Parkland survivors onstage in DC as she shared her “dream of a gun-free world.” Two groundbreaking movements, the Civil Rights movement and the anti-gun violence movement, intersected as the nine-year old inspired students and adults alike. 11-year-old speaker Naomi Walder from Virginia stated that she was at the march “to acknowledge and represent the African-American girls who’s stories don’t make the front page of every national newspaper.”

Also in DC, survivor Emma Gonźalez called for effective gun reform policies and criticized policymakers who refuse to take action. She also closed her speech with powerful minutes of silence on stage, representing the time span of the active shooting in MSD. The march in Washington was also politically charged, with the appearances of many politicians and the partisan split on the issue more apparent in the immediate vicinity of Capitol Hill.

The bravery and eloquence demonstrated by Emma and the rest the Parkland shooting survivors has inspired many students to speak up in their own communities and fight for change. Beacon held its own walkout on March 14th to commemorate the victims of the Parkland shooting and to stand in solidarity with the anti-gun violence movement.

Protest signs were also crucial to the real and online presence of the event. Some popular sign phrases and graphics included a target accompanied by the words “Am I Next?” and bold lettering of the word “Enough.” Kids also sported some of their own signs, highlighting their unnecessary but telling fear of gun violence. Another popular sign read “My Life>>Your Guns,” referencing the donations many GOP politicians accept from the NRA.

The march in NYC also focused on voter registration. Organizers of the march emphasized voting for politicians who support gun reform. In an effort to increase youth voting, volunteers facilitated voter registration with passers-by. NBC New York reported that as many as 4,800 were registered to vote as of Sunday night. There were also over 1,000 volunteers seeking to register people to vote in the 2018 election. This included Beacon students, many of whom facilitated voter registration and petitioned for the Young Voter Act with the Youth Progressive Policy Group and Brooklyn Voters Alliance.

The March for Our Lives showed the power of youth to advocate change. As a united front, demonstrators were able “get out the vote,” share stories of survival and heartbreak, and fight for their lives. The movement will continue with the National School Walkout on April 20th, the anniversary of the Columbine shooting massacre. For NYC students, NYC Says Enough will hold a rally in Washington Square Park at 12pm to demand legislative action on gun control from our state and federal policymakers. 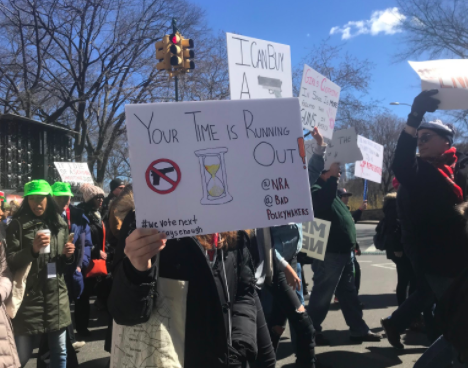