Crazy Rich Representation: A Closer Look at Asian-American Diversity in Hollywood in 2018

Asian-American representation in Hollywood films catapulted this past summer. The most notable of these movies was this August’s Crazy Rich Asians; the first movie to have an all Asian cast since the Joy Luck Club premiered a quarter of a century ago. Movies such as Searching, which focused on a Korean American family, and A Simple Favor, co-starring Crazy Rich Asians Henry Golding also came out this past summer.

And there was more: the book series by author Jenny Han, To All The Boys I’ve Loved Before was adapted into a Netflix film in August. The book-film romantic comedy adaptation centers around a Korean American teen, Lara Jean Covey Song, played by Vietnamese Lara Condor. As the film progresses, she is faced with the frightening, yet relatable reality when five of her secret love letters are revealed. The movie, although not a Hollywood blockbuster, was another example of representation of Asian Americans.

Being of half Korean descent, I loved watching these movies released this past year. I loved even more that the audiences in the theatres weren’t at all all Asian, people of all backgrounds wanted to experience these stories. These movies also brings back the conversation of how much diversity Hollywood still excludes many minorities. Growing up, I always loved watching rom-coms and chick-flicks, however I always noticed that for the most part, these roles were given to white actors. Being a young child, the lack of diversity buffudled me. But the recent influx of Asian representation and the release of these mainstream movies, brought a small happiness to my nine year old self. 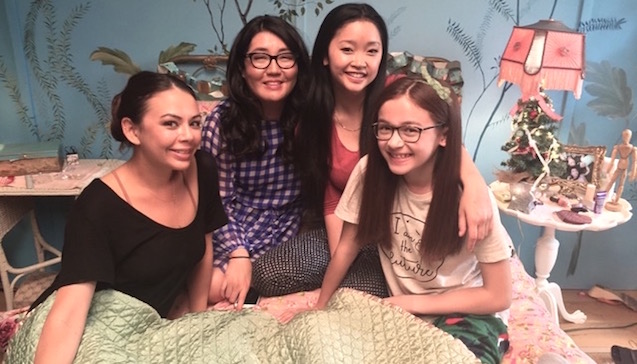 To All The Boys I’ve Loved Before became an instant success on Netflix, viewers raving about the relationships between Lara Jean and the film’s leading male, Peter Kavinsky, played by the extremely popular breakout star, Noah Centineo. The casting of Lara Jean, although thrilling for most, was initially not met with any enthusiasm. In an article published by Teen Vogue, author, Jenny Han discusses, “I think that one of the biggest struggles with it was to find the right partners who would agree to cast an Asian-American family, and to have Lara Jean, specifically, be Asian.” Many seemed to be excited by this book to film adaptation, however that anticipation seemed to die out when producers and representatives discovered that the lead would not be played by a white girl. Fortunately, Han was able to find executives who wanted to stay true to the novel and cast an Asian American lead. Furthermore, the director of the film, Susan Johnson says, “I am glad that Jenny was strict about staying true to the ethnicities of the girls in the book. But we didn’t want to make it about the Asian American experience. Because that is not what the book is.” This is another important distinction, it was extremely that this movie be appropriately casted, however it was almost equally important that then the movie would not become about “being Asian.” The director also noted how there was no need to acknowledge the physical presence of those who are the minorities in most settings: “I think it makes it more relatable to people. I did a Q&A last week, and most of the young people at the end were like, ‘Thank you for making a high school look like our high school. It was diversity all around. And we never see that in movies.’” Diverse castings in movies will promote a greater connection with audiences because they see what a high school really looks like, not a whitewashed version.

Jenny Han’s casting struggles, embodies the whitewashing that will be forever be present in Hollywood, no matter how diverse films become. Even though this summer may have been a time to celebrate Asian Americans in film, it is hard to forget that only three years ago Emma Stone, a white actress, was cast as an Asian-American character in the 2015 film, Aloha.

On a brighter note, the growth of representation this year has been uplifting. The exposures for these actors will hopefully bolster their careers even further and open the door for more opportunities. I believe however, and I think many do, that this is just a start. This issue isn’t as simple as, make a few movies with majority Asian American cast and all diversity issues will be fixed, it’s much more complex than that. When asked whether or not these movies would make a long lasting impact on how ethnicity and diversity in general is portrayed in Hollywood, a friend summed it up perfectly by saying, “I hope that filmmakers don’t believe they have reached a quota and stop producing movies with Asian leads… I really hope that we’ve crossed a threshold and now live in a more inclusive and representative world, but I won’t doubt Hollywood’s ability to revert back to old habits.” Sure, this summer showed immense progress, but this by no means is an end, it’s a solid base line, that Hollywood can’t backtrack on now.