It is March 11th. In the middle of one of the most highly anticipated NBA seasons of all time, Utah Jazz center Rudy Gobert tests positive for COVID-19. He had only tested before the game for precautionary reasons, as no one had expected any cases. The Utah Jazz-Oklahoma City Thunder game that night was postponed, and Utah said they would be working with the CDC to take necessary steps forward.

But it didn’t matter. The NBA shut down that same day, a sudden suspension on the 2019-2020 season. People in the media said it was Gobert who “shut down the NBA”, when really, it was just his positive test that opened the eyes of the players and teams to the severity of the pandemic.

In the months following, as most of us experienced, the country went into lockdown.  Families quarantined at home, social distancing was enforced when public interaction was necessary, and masks became required in stores and public and general.  With most people stuck at home, many wondered when sports would return.

Fast forward to the end of June, where word was spreading that a bubble was being built at the ESPN Wide World of Sports complex in Orlando, Florida, where rumor had it the rest of the NBA season was going to be played. Once the rumors were confirmed, the process was explained. 22 teams, with their full roster and staff, would travel to the bubble, where they would quarantine together for two weeks before the rest of the season would take place.  There would be daily testing for everyone there, and masks would be required around the complex and inside the arenas.

Then suddenly, the nation was taken over by the Black Lives Matter movement against police brutality and racism, sparked by the brutal murders of George Floyd and Breonna Taylor by police officers. We saw NBA players speaking out on social media, and some participated in nationwide protests.

As the season quickly approached, many players wondered if this was the right time to go in the bubble. However, many players felt they could make just as big of an impact there as they could anywhere else and decided they would return on certain conditions. Power forward Jerami Grant of the Denver Nuggets said that “The consensus was that we could come down here and use our platform to bring awareness to important issues… I thought I could do more here than back home.”

They took on their own forms of protest within the bubble by wearing warm-up shirts with “Black Lives Matter” across the chest, and were allowed to replace their last name on the back of their jersey with one of a few permitted phrases relating to the movement. Teams also knelt during the national anthem in a form of protest and locked arms to show their unified support of the movement.

The season returned on July 30th, 2020. Each of the teams in the bubble would have eight “regular season” games before the highly anticipated NBA playoffs would begin. Surprisingly, there were no positive cases of the Coronavirus in the bubble. However, some players did end up leaving the complex for other reasons and therefore had to quarantine again and potentially miss games.

The NBA playoffs began on August 17th, and the playoff format of past years remained the same. There would be three inter-conference rounds before the Finals that October.  The only difference was the tight scheduling. Teams would be playing every other day, which gave them a much shorter break between games compared to other years.

After weeks of fast-paced and close playoff games, the Los Angeles Lakers and Miami Heat advanced to the Finals after defeating the Denver Nuggets and Boston Celtics in their respective conference finals. The first game of the Finals itself was a blowout, with the Lakers, led by All-Stars Lebron James and Anthony Davis, winning 116-98. Many thought this was how the series could be expected to play out, but they underestimated Miami. After losing Game 2 to the Lakers as well, the Heat pulled through with a big win in Game 3 after some of their star players, namely Jimmy Butler and Tyler Herro, had their hard work pay off.

LA and Miami traded wins in Games 4 and 5, leading to a pivotal Game 6.  The Lakers ended up winning the game and the NBA Finals and became the 2019-2020 Champions on October 11th in one of the most unique seasons in basketball history. 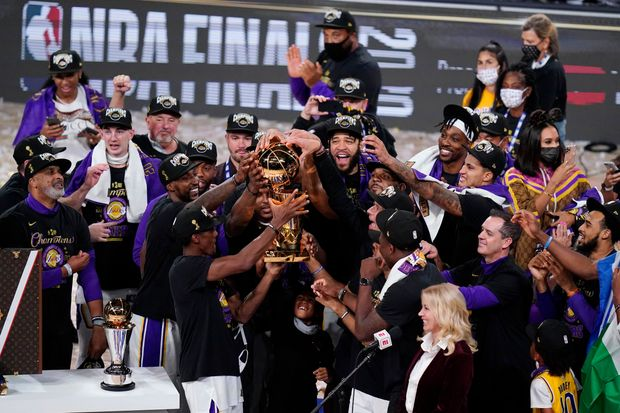 There is no question the players participating in the bubble worked harder and sacrificed more than anyone ever had any other year.  However, that does not mean lovers of the sport have not questioned the process and sparked controversies along the way.

The first thing that seemed to upset fans was that out of the 30 teams in the NBA, only 22 went to the bubble. Sure, they chose the teams with the best records to compete for the championship. However many of the teams excluded were expected to make a playoff push later on. Teams such as the New York Knicks were anticipated to win enough games towards the end of the season to at least snatch a low seat in the playoffs, but they never got the chance since they were not invited to finish the season. This was eventually accepted by most fans, as it was acknowledged that sacrifices had to be made for this bubble to work.

One of the biggest arguments pertaining to this season is whether the Los Angeles  Lakers deserved to win this championship. Not in the sense of whether the team was good enough to win, but whether it was easier for them to win under the format the 2019-20 season presented.

Some felt that without the fans in the stands, or the hostility that comes with away game crowds, the entire environment of the Finals was not as competitive as it should have been. Although the NBA did filter in canned sounds of cheers and chants and had fans video calling into the court, some believed it was not nearly as crazy as a typical playoff atmosphere.

However,  making statements like these would undermine the entire ending of the 2020 season. It is important to remember everything the NBA players, especially the champion Lakers, had to overcome to make this season successful. They cut their break between games in half during the playoffs, and were separated from their families for more than 3 months. They fought for racial justice on and off the court. They worked hard through one of the most challenging times our country has ever been faced with. They knew the risks, but they also knew how much they loved the game and how much it would mean to their city. While stuck at home in isolation, it made fans feel like they were a part of something.

We all witnessed history last season, and we have seen nothing less from the 2020-2021 season since it kicked off on December 22nd.