A Message from the Editors

Today, a pipe bomb was detonated in the Port Authority subway station. Details on what has now been identified as a terrorist attack can be found in the coverage below.

At a time when many of us New Yorkers may feel particularly vulnerable, we must remember to support one another. No matter the politics this attack may produce, we must remain staunch advocates of the values that define our diverse and progressive city — tolerance, inclusivity, and justice.

Mayor de Blasio stated, “The choice of New York is always for a reason, because we are a beacon to the world. And we actually show that a society of many faiths and many backgrounds can work.”

Students, let’s continue to be that beacon.

At 7:20 am this morning a man set off a pipe bomb strapped to his chest within the corridors of the Times Square Port Authority station. 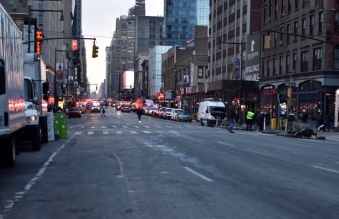 Emergency responders on the scene at 44th Street and 8th Avenue. Four people were injured, including the bomber, but none suffered critical injuries.

Because the bomber had attached the bomb to himself with velcro and zip ties, the police have tentatively assumed that the bomber intended to commit a suicide bombing.

At 1:30, the station was still closed down. The suspect had been apprehended – a man named Akayed Ullah.

Mayor DeBlasio arrived on the scene and issued a statement, saying that Ullah acted alone and that no other explosive devices had been found.